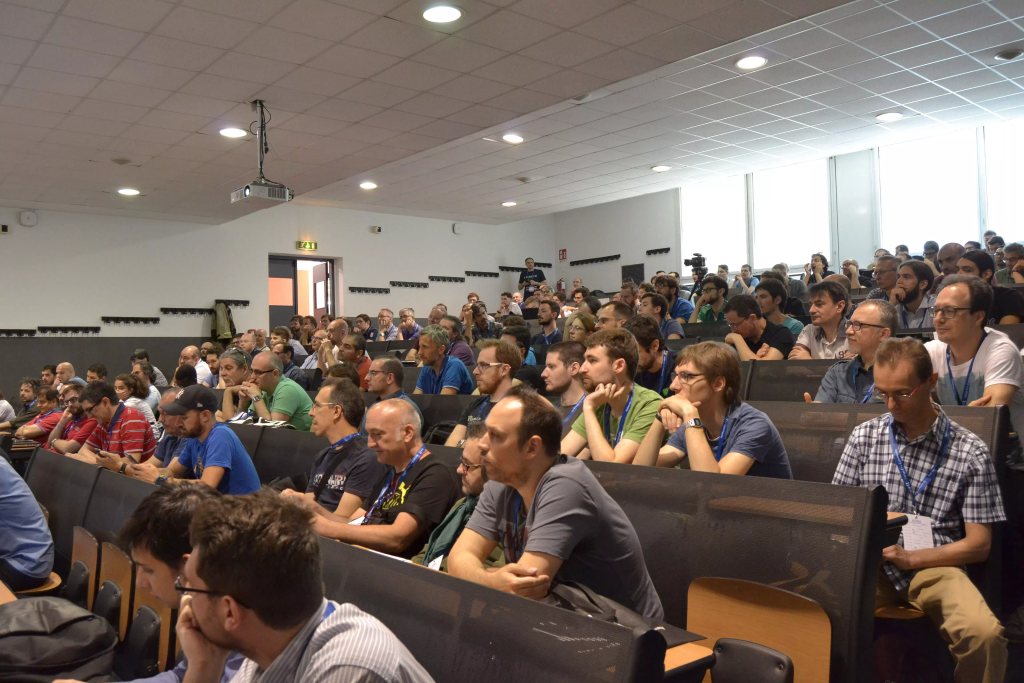 On June 23, 200 people swarmed in Milan and attended the Italian C++ Conference 2018, one of the Italian C++ Community event formats. Again, we had a sensible drop rate (~28%) and we are discussing ideas to contain such a phenomenon in the future. Anyway, our target has been achieved: 200 attendees. The event fell the day before the community turned 5 and then I put on something a bit more special during the welcome message.

The event was hosted at Università Bicocca which I would like to thank a lot. Bicocca hosted us for the third year in a row!

As usual, the Italian C++ Conference 2018 has been organized starting from no budget and relying only on sponsorships. As I told during the event kick-off, two main things constrain the number of available (free) tickets: 1) number of (physical) available seats, 2) food and drinks. The former is free (thanks to our host) and the latter is generally quite expensive (e.g. 1 coffee break + 1 lunch for 200 people = 17.5 € + VAT per person).

This year we had 10 sponsors and thanks to such a huge number of contributions we were able to fit our budget a proper catering and also some extra gifts for all the attendees like: fully customized badges and lanyards, C++ bags, C++17 cheatsheets (last year we bought them), C++ stickers.

See some pictures of the conference.

I led an awesome staff. As usual, Alessandro Vergani and Guido Perderzini played with me fundamental roles in the event organization. At the event, Marco Foco, Illya Dudchenko, Gian Lorenzo Meocci and Raffaele Rialdi joined us and gave a huge support. Thank you all guys!

Last but not least, a big shout-out to our awesome 200 attendees!

As usual, when people sign up for the event we ask a few questions about their experience with C++ and tools. Let me share some data with you. 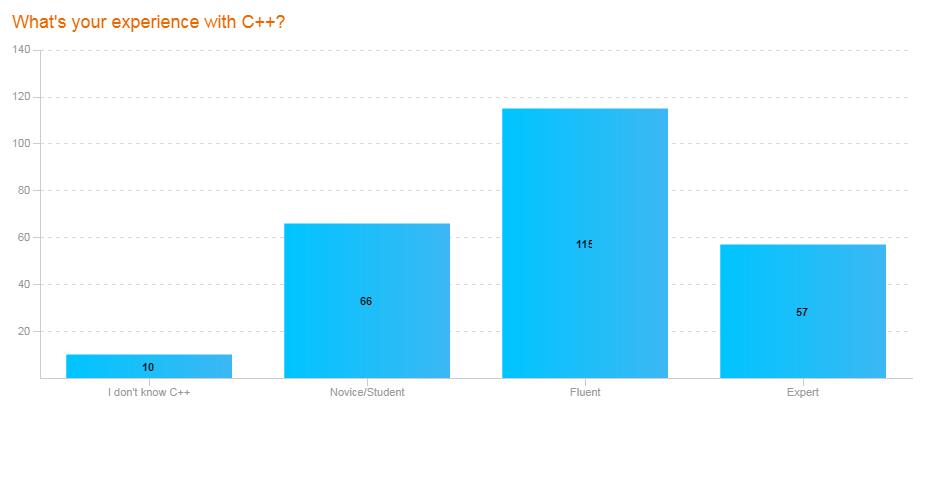 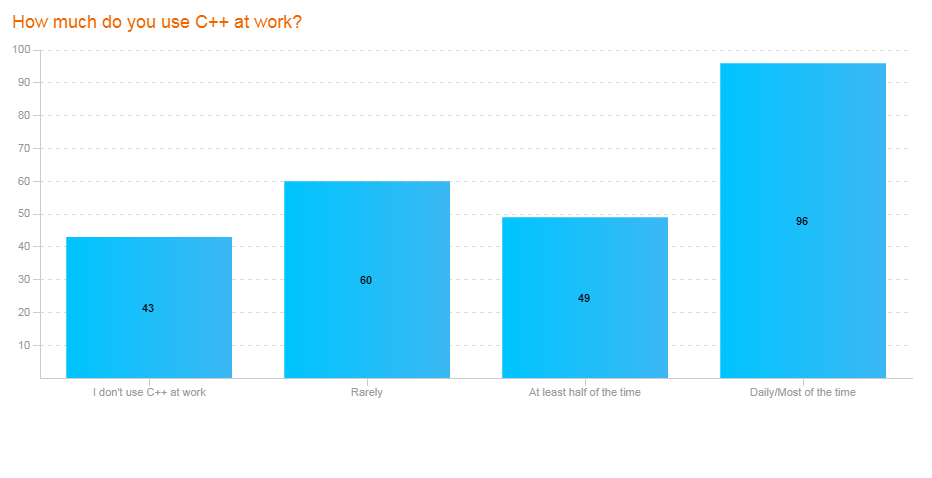 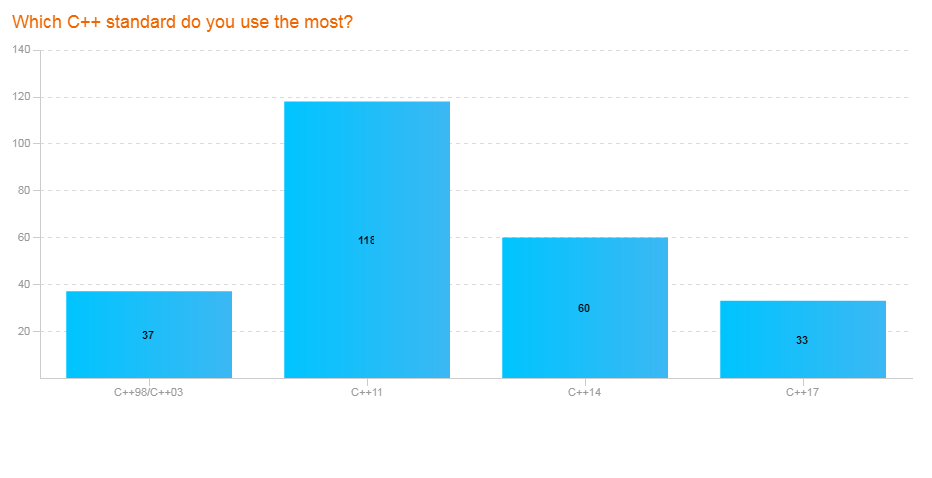 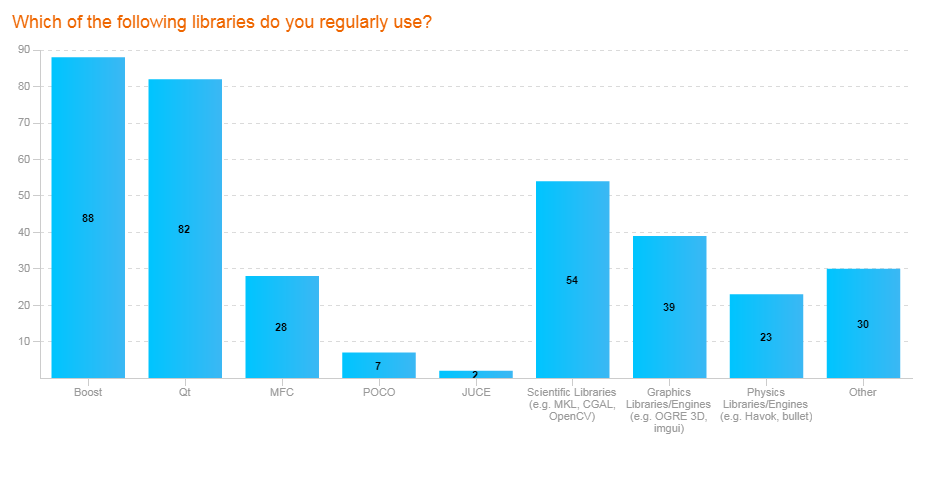 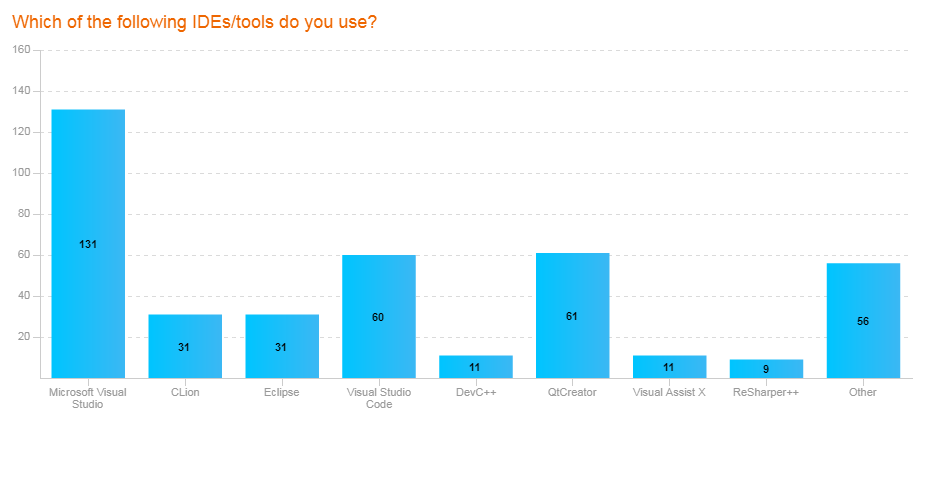 The Italian C++ Conference 2018 was a full-day event about C++ development with 1×90′ keynote and talks arranged in two parallel tracks throughout the whole day: 8×50′ talks and 2×20′ short talks.

Networking and breaks: 1h before the kick-off, 2×30′ breaks (1 morning, 1 afternoon) and 70′ lunch break. We served food and drinks during the first coffee break and lunch (actually left-overs were served on the second break too, although that was not planned).

Most part of the talks were in English (slides here and videos here). Peter Sommerlad gave the keynote ABC – Agile BMWs and C++: 30+ years as a Software Engineer, very well received. Other talks concerned several topics:

1) This year, for the first time, the conference took place on two floors. I was strongly against placing the catering on the first floor and the rest of the conference on the ground floor, however we had no choice due to new policies of the university. Anyway, the event went well but a few people (and a sponsor) flagged this as a possible problem.
Action for next year: negotiate a single floor, although this will requires to change building and thus paying some money.

2) I had overhead with a few suppliers, in particular those I had to visit, email or call (instead of doing everything from a website). The final result was fine but I had to push for proceeding with the job.
Action for next year: try to buy everything online or press this year suppliers from the very beginning of the organization.

3) For the first time in 5 years I went to the conference setting the day before to set things up. In particular, Alessandro Vergani and I unloaded boxes from suppliers/sponsors and we brought them to the university. In addition, we prepared all the “C++ bags”. This would have required too much time the day after. On the other hand, our video makers had time to try lights, sound and could fix a few issues they found with the system. Having this half-day at the university was a killer feature for the conference.
Action for next year: take advantage of such a time slot and set up an even more detailed plan to save time the day of the event.

As it generally happens, about 50% of attendees gave feedback. In general it was quite good and I am very happy that the community has appreciated our effort.

Our events come with prizes only for “best tweets”. The definition of “best tweet” is unspecified though…A few are listed below:

#itCppCon18 There are two kinds of singletons, only one of them can make the world better 😁 @PeterSommerlad pic.twitter.com/n7HqKAz6qs

The behavior of the coroutines reminds me the way my wife handles me: co_await, co_yield and co_return. She is the main task. #itCppCon18

I am driving the community towards an aggregator model where we keep on organizing activities and events, but we also help other people make C++ events and activities in Italy by patronizing them. The very first “implementation” of such a model will be the C++ Day 2018 in Pavia, on November 24th. Riccardo Brugo and Federico Pasqua are are leading the organization of this event and we are working with them.