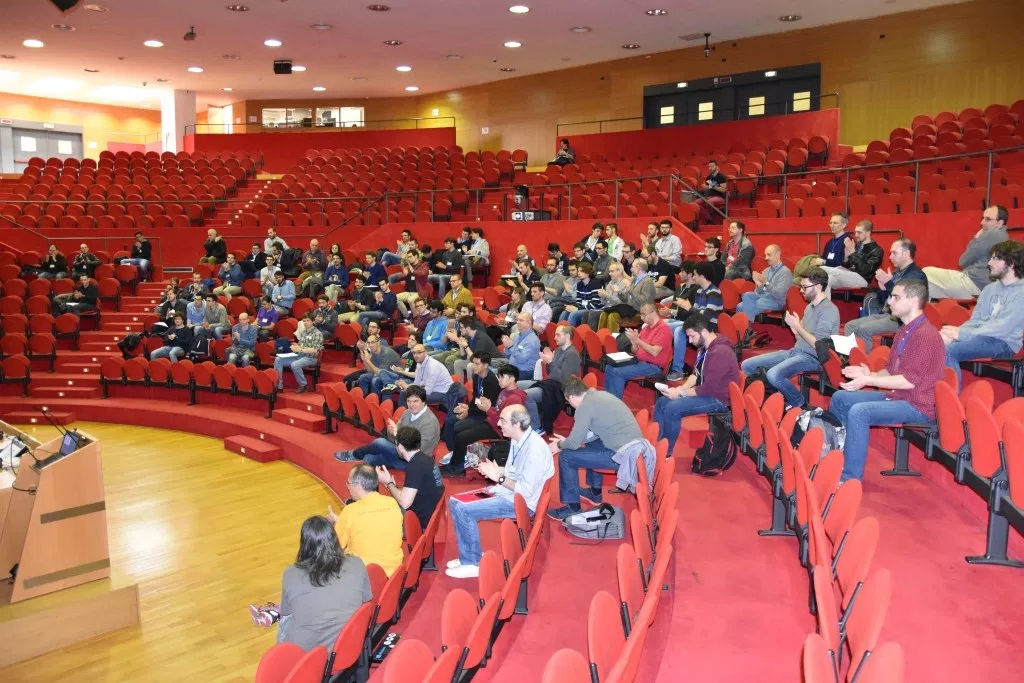 After two years of meetups and participations) in Italy, last Saturday we had more than 100 people attending (130+ registered people – ~22% drop) the first edition of the Italian C++ Conference, in Milan, our new free event fully focused on C++. Hosted by “Bicocca” University and sponsored by RogueWave Software, we delivered 5×60′ technical sessions, 1×30′ sponsor demo session and 1×40′ Q/A panel. It has been a great day!

The main theme of the conference was: “making life easier with C++, after 5 years from C++11”, with real stories of modern C++ usage and adoption.

We had a special guest: James McNellis from the Visual C++ Team!

I’m writing this brief report in English because I think it’s worth sharing our outcome with the entire C++ ecosystem.

Find here more than 140 pictures of the day!

A big THANKS to Bicocca University people (in particular to Daniela Micucci) for the awesome location (we were in the Aula Magna) where they gently (and for free) hosted our event.

A big THANKS to our sposnor RogueWave Sofware (especially to Elena Maria Brambilla) for its huge support and for the great talk about static analysis.

A big THANKS to my staff (random order: Franco Milicchio, Stefano Saraulli, Marco Foco, Alessandro Vergani, Raffaele Rialdi, Gian Lorenzo Meocci, Paolo Severini) and to Renato Marzaro. This event wouldn’t have been possible without these guys. A big THANKS also to Develer (especially to Mena Marotta and Luca Ottaviano) for constant support.

Last but not least, a huge THANKS to more than 100 attendees we had! A great result for the C++ ecosystem. 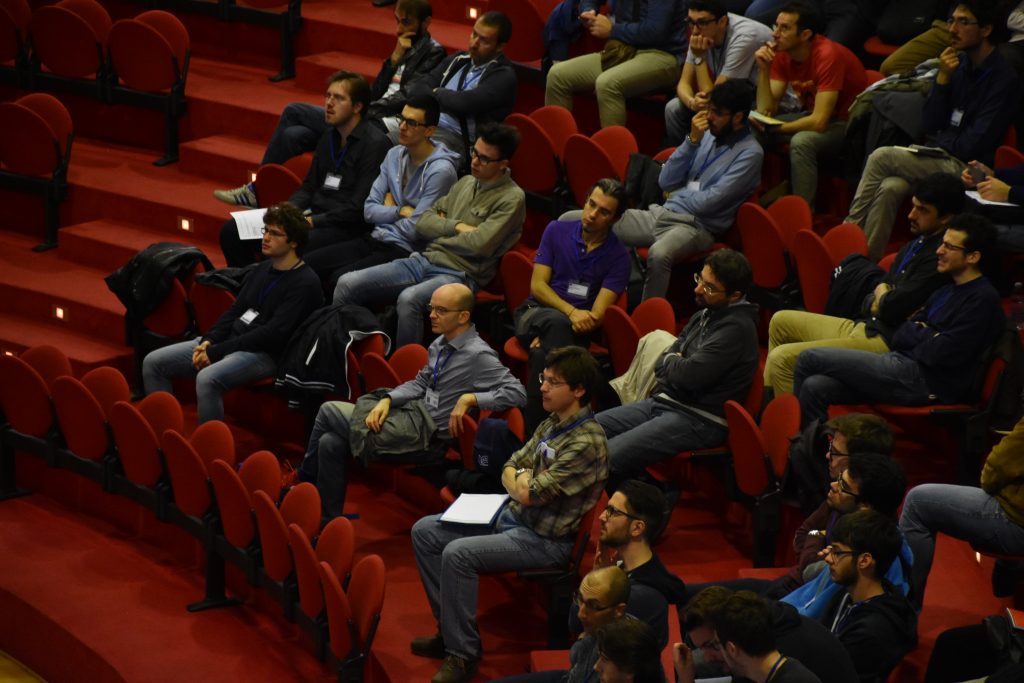 Structure of the event

The event consisted of a simple agenda:

Lunch break in the middle and two coffee breaks (one in the morning, one in the afternoon).

Networking is always very important for us and for this reason we choosed a location with huge spaces for meeting and discussing:

First of all, the university recorded videos of the sessions.

Apart from James’ talks, the others were in Italian.

This tweet by Elia Cereda is a one-liner summary of the speakers on stage:

Attending #itCppCon by @italiancpp. Microsoft, NVIDIA and Formula 1 engineers on stage. Who ever said C++ was boring?

A few lines on the talks:

This session consisted of an in-depth introduction to C++ coroutines, one of the most interesting new features being proposed for C++ standardization.

The C++ language is really powerful and flexible, but as a great power it comes with great responsibility. I explained this idea through real stories and thoughts I developed in the last years. I’d like to write a blog post about this session.

Hands-on session by Raffaele on Microsoft REST SDK (“Casablanca”), with live examples of interacting with Webservices like Microsoft Cognitive Services and some theory about how things work with Casablanca, PPL, tasks, JSON input/output, etc.

In this hour, Marco investigated what’s the “original sin” of C++”, why most of C++ courses are still C courses with an object orientation appendix, and how all this could change when teaching modern C++.

In this session, James discussed his team’s experiences from the challenging “modernizing and redesigning the Microsoft C Runtime (CRT)” with the goals of improving long-term maintainability, performance, and usability. He shown techniques they used in modernizing a decades-old codebase and discussed at some of the challenges that they faced, lessons that they learned, and best practices that they developed during the course of the project.

Why I loved RogueWave’s speech

When I got in touch with Elena from RogueWave I realized they would have wonderfully fitted the conference because the main theme of the conference was about simplification and RogueWave Software is committed on developing tools which make programmers life easier. Static analysis, for example, is an important tool for C++ development.

I loved RogueWave’s talk because it was 7′ of “company presentation” and 23′ of demos. They shown real examples of their tools and they answered many questions from the attendees. And they finished on time! 🙂

This talk was recorded and it was given in English so you can watch it.

As usual we employ Joind.in as a feedback system. Here is the page for the Italian C++ Conference 2016.

I also got good feedback via email and just having a chat with some people after the event.

We got 300+ social posts about #itCppCon, involving more than 75 users, reaching 26k people around the World!

Here is #itCppCon on Storify.

We awarded the best tweets of the day with O’Reilly books (our partner, who sent us some books for this event) and with some JetBrains licenses.

This may be the best thing ever: in Italian, “C++” is pronounced something like “chee pew pew” #itCppCon

This is basically about the importance of giving feedback 🙂 (every time you don’t give feedback, a kitten dies).

And the clever example of std::shuffle :):

And Samuele’s one was “we need 7 lives to learn C++…what did we do in our previous life to deserve being reincarnated in C++ developers?!”:

Alessandro and his friend Samuele won these books:

A great success for both the Italian C++ Community and the C++ ecosystem in general.

In this first semester of 2016 we invested in organizing such a big and high quality conference instead of doing “smaller meetups”. Actually in the last 2 years “smaller meetups” meant something like 50/60 people per event (our record was in Pordenone with 80 people), attending 5/7 tech talks (30′ and/or 60′).

Thanks to all and stay tuned for our future activities!